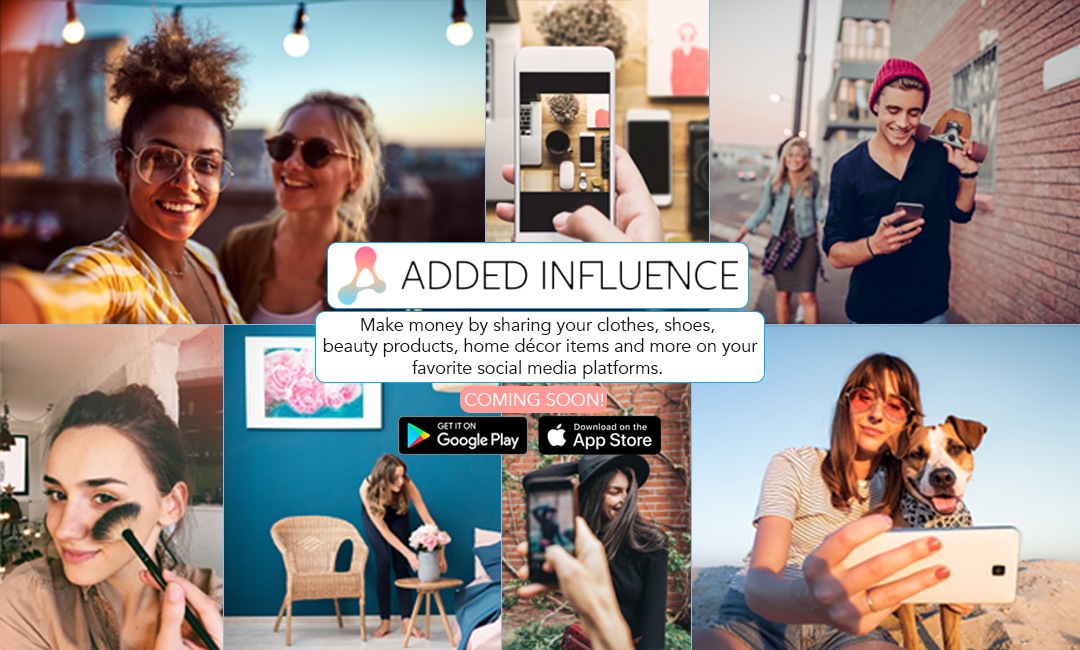 Back Added Influence on Kickstarter!

Want to make money by sharing a pic of your new sunglasses on Facebook, Twitter or Instagram? How about your new makeup brush, favorite flower vase, kitchen utensil, phone case, shoes, hat, or heck, even your dog’s beloved bandana?

We’re excited to announce we’ve just unveiled our brand new app, Added Influence, on Kickstarter! We’re seeking early adopters and beta testers (psst… that’s you!) to be the firsts to use the Added Influence app that lets you earn money just by sharing your favorite clothes, shoes, home décor, beauty products and more across your favorite social media platforms.

Here’s the link to our Kickstarter!

Sneak Peak into the App

It’s super easy to start sharing. Just open the app, snap a photo of the item you want to share and find it in the AI database full of thousands of popular brands and stores. Copy the link and share it wherever you want. When someone clicks on the link you share, you get paid. Simple as that!

With the app’s innovative yet super easy-to-use dashboard, you can see what products, brands and retailers you make money on and which ones you don’t, giving you valuable insight into what your followers like, and what to share next to make the most money.

Who is Added Influence for?

Bloggers, non-bloggers, influencers, non-influencers, foodies, fashionistas (and fashion-misters), shoe & tech addicts, life explorers & adventurers! The more, the merrier! Added Influence isn’t just for well-known YouTubers and bloggers or people with millions of Instagram followers (though hey, we like you too!). Whether you have a million followers or just one, you can use AI to make money when you share your favorite products.

“We wanted to create an easy way for everyday people (not just influencers with tons of followers) to make some extra change by doing what they usually do — posting photos of things they like,” says Jodi Manning, CEO of Blender Networks, Inc. the parent company behind Added influence.

JT Manning, President and Co-Founder of Blender Networks (and husband to Jodi:) chimes in, “Added Influence is for everyone. There are no hoops to jump through and you don’t need a million followers (or like, even one) in order to join — our only request is that you want to sign up. And hey, we made that process easy too.”

Back us on Kickstarter to get early access to the app so you can start making money before it officially goes live in the App Store® and Google Play™ Store!

Get to know Added Influence more by liking & following us on:

No comments yet. You should be kind and add one!

This site uses cookies to give you a more personalized shopping experience! Cookies store useful information on your computer to help us improve the efficiency and relevance of our site, and in some cases, they are essential to making the site work properly. By accessing this site, you consent to the use of cookies. For more information, please refer to our privacy policy. Happy Shopping!